If you are a big fan of  Julie Andrews and you’re familiar with this clip from The Sound of Music, then you may have heard of the Austrian city of Salzburg. Salzburg sits on the border of Austria and Germany and is home to an incredible views of the Eastern Alps.  The Salzach River divides the city into Altstadt (Old City) on its left bank, and Neustadt (New City) on the right. Salzburg is also famous for being the birthplace of the prolific composer, Mozart.

We arrived in Salzburg in the late afternoon after departing from Venice that morning.

It was a long drive but we were spoiled with amazing views of the alps and a snowball fight at one of our stop-offs along the way. I love just standing down on the ground in the snow looking up at the alps. They are so magnificent and pure-looking. They make you feel small and humble and lucky to be alive and surrounded by so much beauty.

When we arrived in Salzburg we had a short walking tour.

We visited the Mirabell Palace and Gardens, which is where The Sound of Music clip I linked you to was filmed. The palace and gardens were Built by prince-archbishop  Wolf Dietrich von Raitenau in 1606 – as a gesture of love for Salome Alt. In 1854 the gardens were opened to the public for the first time, and they have since remained a landscaping gem. The gardens are early baroque style with floral ornamentation, carefully manicured trees, decorative urns, and balustrades.

When I was little my parents got me The Sound of Music on video (yes, VHS – not DVD… I feel really old now). Apparently I annoyed my older sisters quite a lot with constant reruns. Personally, I think it’s a great film and I was super happy to get a photo in the Mirabell Palace Gardens. #lifegoals 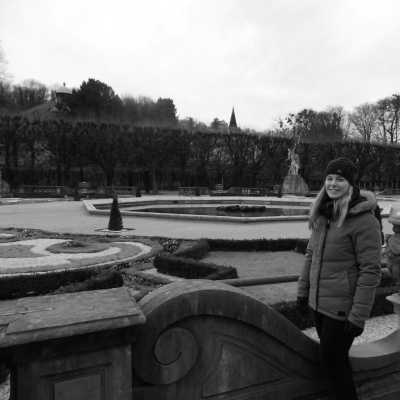 After visting the gardens, we walked though the new city and towards the Salzach River. We crossed over Makartsteg Bridge, which has a spectacular view of Salzburg. It was dusk and the city lights were reflecting on the water. You can just see the alps in the distance, peeking over some of the buildings.

Makartsteg Bridge is famous for locks. The bridge must attract a lot of lovers who are determined to prove their undying love for each other by attaching a little lock to the fencing.

How cute. I was planning to return to the bridge and join the trend, but unfortunately I didn’t make it back for reasons I will explain later…

Our walking tour ended and we had a couple hours of free time before we were meeting up for dinner again. Katie and I grouped up with a couple of others and started roaming the streets. There were lots of twinkling faiy-lights everywhere and the city really did look  like something out of a fairytale.

We spotted Mozarts Geburtshaus (birthplace), a bright yellow building. There are a lot of Mozart-related souvenirs in Salzburg, too, if you are a big fan you can get anything from little chocolates to figurines to fancy ornaments.

Wanting to get out of the chilling night air, we headed inside a Christmas-decoration store. Oh my goodness. It was amazing. The decorations were eggs; all different shapes and sizes that had been hollowed out and hand-painted. Each one was so intricately designed and perfect. I wanted to buy some as souvenirs but knew they probably wouldn’t make it home intact in my suitcase. 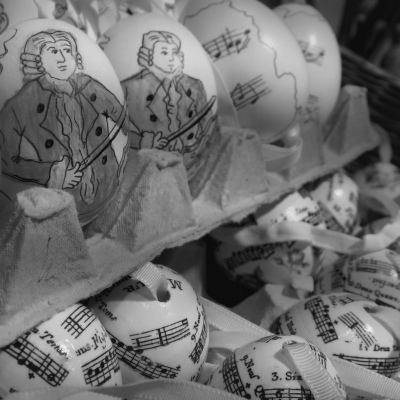 There were so many eggs!!!

After looking around we braved the outdoors again, only to stumble across a cute little stall that was selling Schokoladenpunsch; a warm drink like a hot chocolate, but alcoholic. I chose a chocolate/coconut flavour and it tasted like a glass of Baileys, but warm. I’m a fan of Baileys, and thought it was delicious. Luckily for me, Katie didn’t like the taste so she gave me the rest of hers as well! We sat down on a cute little couch with Zoe and huddled under a blanket while we waited for dinner time.

Finally, it was time to get out of the cold and go for dinner. And now is the part where I get to tell you why I didn’t do anything in Salzburg the next day.

When we were in Rome, Katie and I got really unlucky and were stuck in a cabin that had no air-conditioning. I knelt on my bed and some of the slats fell out from the bottom. A stray cat also ran into our room and jumped up on my bed. When we closed the door, we got locked inside and I had to shout out of the bathroom window for help, which was pretty funny – but things got worse. The shower had stray pubes in it from the previous visitor (yuccckkk). And when we arrived back late at night our beds and blankets were damp. As you can imagine this was not a healthy way to sleep and we both got pretty sick – me first, then poor Katie too.

So, by the time we were getting dinner in Salzburg, my throat felt raw and like it was on fire. My eyes were stinging. I had to excuse myself from dinner several times to go and cough in the bathroom. I coughed so hard I thought I was either going to choke or throw-up, there was a lot of phlegm, and I had tears in my eyes just from the force of my coughing. It was not nice at all. I don’t think I’ve ever been that sick in my whole life, it was a ‘cold’ but it felt like death.

Apparently colds are a lot worse in Europe than they are in Australia.

So the next morning I decided I needed a day of recovery. Topdeck tours are amazing but they are very full-on, and I just wanted to take some time-out to give my body a tiny chance of recovering.

Massive shout-out to my amazing friend Katie who snuck breakfast up to our room and left it by my bed for me so I had something to eat later on when I woke up. What a legend! I love that girl.

I stayed in bed most of the day and slept. Then I Skyped my boyfriend which made me really, really homesick. I may have cried a little. I know, I’m a sook. Then I went and had a really long, hot shower, seeing as no-one else was in the hostel at this point in the day.

When everyone came back I was feeling quite a bit better, but Katie and I actually ended up being sick for the rest of our holiday. We were survivalist enough to keep pushing through and didn’t let it hold us back. It was annoying, but our holiday was still the experience of a lifetime.

While I had been sick in bed, everyone else in our tour group was off having an amazing time! Some people went skydiving, others went skiing, some went on The Sound of Music tour and others explored museums and Fortress Hohensalzburg. Salzburg might seem smallish, but there’s still quite a lot to do.

Salzburg is a beautiful, cultural city. Seeing as I didn’t get to experience too much of it myself, I’ll leave you with a link to a website filled with things to do in Salzburg.

I wish I hadn’t been so sick because I would have loved more of a chance to explore this amazing city.

Hopefully one day I’ll be able to come back, but until then I have my memories of snow-capped alps and Schokoladenpunsch!

For more of my European adventures, check out our itinerary.

Have you ever been to Salzburg or thought about going there? Are you a fan of Mozart or The Sound of Music? What would you most like to see there?

READ MY STORIES ON WATTPAD