On our first day of the tour, everyone was asking each other the same question; ‘which place are you most excited to visit?’

My answer was Switzerland, and that’s where we were headed today.

After an early start, we embarked on what would be a long journey. Paris to Lauterbrunnen, Switzerland is approximately a 7 hour drive. Combine that with toilet stops and lunch breaks and we were in for a long day ahead.

The good news is that the view is simply picturesque. The bad news is that by the time we were crossing the Swiss border, it was getting dark.

Nonetheless we found ourselves in an amazing environment; we drove up hills surrounded by trees that were laced with snow and ice.

The sheer size and magnificence of the hills left us feeling very small but very proud to live on such a beautiful planet.

We arrived at our accommodation, Schützenbach Backpackers & Camping / Hostel, and had a little trouble squeezing the bus around in the tight-fit of the car park. Luckily, our bus driver, Bogdan, was a bit of a legend and we got there in the end. The accommodation was pretty average; the small cabins were a tight squeeze for four girls with suitcases, and the bathrooms were a bit of a walk from our cabin – we also had to pay to shower with hot water. Other than that it was fine; everything was clean and tidy, the beds were comfy and the rooms were warm. It’s not like we spent much time in our rooms anyway!

Some of the waterfalls are several hundred metres high, and they cascade down from the cliffs. Because they are so high up, the water looks as if it is falling in slow-motion.

There was a super-cute bar at the hostel where we met up for dinner and drinks. From the ceiling there were hanging coasters and notes from other people who had been there – a lot of Topdeck and Contiki groups. There were banners on the wall with comments. There were tree-stumps to sit on and what looked like a tree trunk that was designed to hang your coats on… which almost poked my eye out with one of it’s branches a bit later on that night.

We had a group dinner which included a very suspicious-looking sausage thing, and afterwards we went back to our cabin to prepare for the night ahead. It was New Years Eve so we were expecting a big one, even in this tiny town! Somehow with four girls in our rather cosy cabin we managed to get dressed and make it back to the bar.

It seemed really quiet at first, with just our Topdeck group being in the bar. We were all still only just starting to get familiar with each other so things were a little slow to get started, but it ended up being the best New Years Eve (so far) of my life.

Katie and I decided to adorn ourselves with the paper streamers the hostel staff had used to decorate the tables, and we encouraged the boys and girls on our table to do so too. And my-oh-my we sure looked fabulous, right? After awhile everyone got chatting really comfortably with each other, and when the music started to get pumping we all got up and started dancing. At the bar we discovered that there was a discount for buying two jaeger bombs instead of one.. and so Katie and I started taking advantage of that.

Suddenly our group seemed a lot closer and we were all acting like we’d been friends for years, and it stayed that way for the rest of the trip.

We also noticed a strange item on the drinks menu called a ‘Swiss Sperm Shot’. Curious, we asked the bar tender what it was, and he told us it was specially harvested from the finest of Swiss men. Charming, right? Thankfully he was kidding (although I was ready to believe him, gullible much?)

Because we’re brave, and because we’d had quite a few drinks by this point, we decided to try the shots. They tasted like Baileys and milk and came (no pun intended, I swear) in a cute (?) container in the shape of a very cheerful-looking sperm.

For the rest of the night, I mainly remember dancing around and prodding people in the stomach with my Swiss Sperm Shot, telling them they were impregnated. In hindsight, this is a bit embarrassing and I apologise to everyone I victimised/befriended that night.

Later on, the pub was invaded. A group of Swiss men and women entered, carrying massive cowbells. They walked around the pub, swaying the cowbells to and fro. It was so confusing, we had no idea what was going on. They were all in uniform and looked very serious, so we figured it must be some sort of tradition. It was extremely loud, and it went for ages, whatever it was. I think my ears were still ringing the next morning. Katie and I decided to embrace it, swaying in time with the cowbell-bearers.

We had no idea what was going on, but it was great.

At midnight, the music stopped and everyone cheered and people kissed and hugged and I kind of stood there and sent my boyfriend Josh a, ‘happy new year from Switzerland message’, wishing he was here for a midnight kiss and to experience the Alps!

The next morning it was a bit of a struggle to get up, to say the least, but we had the prospect of a trip up to the top of Jungfrau to get us motivated. Jungfrau is the one of the main summits of the Alps and is also the location of Europe’s highest train station.

We walked from the hostel to the train station at the bottom of the valley. It was a beautiful morning; the sky was a crisp blue and the sun was shining. There was a little bit of fog but it only added to the mysterious beauty of the Alps. We passed by a sweet little church, and wandered down the frosty pathway towards the train station.

At the bottom of the valley we jumped onboard a train. It begin a fairly steep ascent up the side of the mountain. The small village began fading away as we climbed higher and higher. Within a few minutes the view was incredible.

The further up the mountain we got, the better the view was.

It literally just kept getting better and better, I was getting so snap-happy with my camera. Everyone was darting about the train, opening the windows and sticking their cameras out to try and capture the beauty. 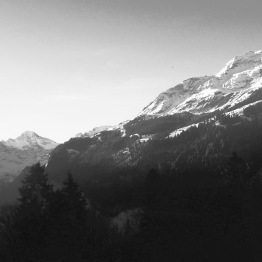 Quick selfie before the train left the station

Partway up the train stopped and we clambered off. Everyone was so excited to finally be in the snow; for a lot of people it was their first time ever seeing snow, let alone touching it. We waited for one of the special red trains to take us up the rest of the way to the Top of Europe. It was quite a long journey up and my ears were popping the whole time. When we got to the top I felt a little light-headed… being so high up, the air was thin. We climbed up stairs to the viewing platform – and what a view. The trip up Jungfrau is expensive but I think it’s worth every cent; I would do it again in a heartbeat.

To be able to get the chance to witness so much beauty in one place is just mind-blowing… we live on an incredible planet.

After spending awhile on the platform taking in the view, we stepped outside onto the snow. Katie and I decided to build a snowman, who we named Lindt after the chocolate we used for his nose and his eyes. We were pretty distraught when Katie slipped over in the snow and destroyed poor Lindt. 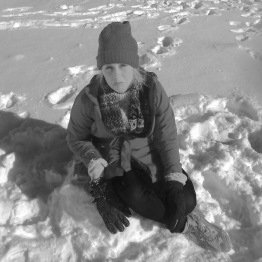 We’re on top of the world!

We caught the last train back down to Lauterbrunnen as it was starting to get dark and we wanted to buy Swiss Army Knives before the store closed. A big group of us ran down the streets towards the shop, and they stayed open for us… which I guess benefited both parties. I bought myself a white Swiss Army Knife with the words ‘Europe 2016’ engraved on it, and I also bought Josh a green one with a little message from me engraved on it. You can only buy the green and white ones in Switzerland so I thought that was pretty awesome to have. I also bought myself a snowflake charm for my pandora bracelet as a memento for my winter adventures in Europe.

I had an amazing time in Switzerland. Lauterbrunnen is such a stunning, quaint little town and I hope I get to visit it again sometime soon.

I would love to hear your thoughts and comments! Please feel free to write in the comments section below 🙂

Check out the rest of our adventures!

READ MY STORIES ON WATTPAD